RASSIE ERASMUS HAS confirmed that he will step aside as Springboks head coach after the World Cup.

The former Munster boss has been in the role since late 2017 but is also on a six-year contract as the South African Rugby Union’s director of rugby.

Erasmus had previously indicated his intention to step down as head coach at some point in the future, but he has now confirmed that Saturday’s World Cup decider against England will be his final Test in the role. 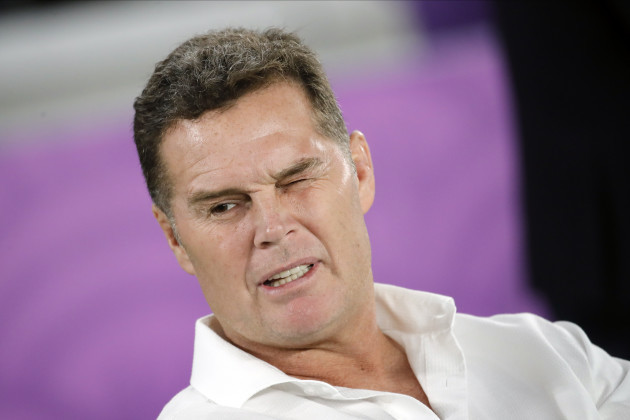 Erasmus will focus on his director of rugby role post-World Cup.Source: Christophe Ena

The 47-year-old is still expected to have some hands-on involvement with the Springboks moving forward, but he understands that this weekend will be emotional as he occupies the head coach position for one last game.

As South Africa and the rest of the rugby world have been swept up in the story of the Springboks’ World Cup campaign, Erasmus has been unable to resist acknowledging its power too.

“To be honest, it’s been 25 Test matches, and is probably my last Test… it is my last Test match that I will be the head coach,” said Erasmus after naming his team for the final today.

“For me, it’s an emotional one in the sense that I didn’t think 25 Test matches will go that quickly.

“When I went to Munster, I was sort of in the mode of doing the family thing and making sure that I see my children in the last four or five years before they get out of school, and thinking more strategically in terms of how we are going to get the schoolboys when I got back to South Africa, and help the sevens and help [former Springboks boss] Allister Coetzee.

“The moment you get hands-on with the Springboks again, the adrenalin starts pumping again and you get back into the mould again, and it is a totally different feeling, and I am enjoying it thoroughly now.

“It’s wonderful to be here. It’s sad that it’s only three days and then it is all over. But I will be heavily involved, hopefully, still after this – whatever way we are going to go with the head coach. 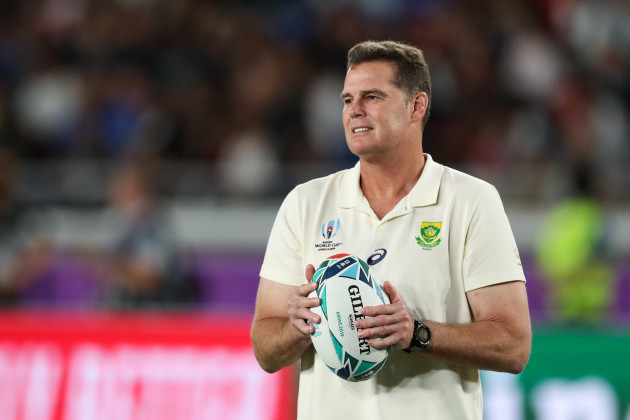 “But I’ve totally changed my mind. I believe if we play the right way, and with the passion, and the people can see it, it just helps people forget about their problems and agree with things.

“I have enjoyed it thoroughly and whatever happens on Saturday, we have to make sure we use this for the next four, five, six, seven years – that it doesn’t get lost again, the positivity and what we get out of Saturday.”

Siya Kolisi has been the figurehead in the Boks’ resurgence under Erasmus as the first-ever black captain of the South African national team.

Erasmus insisted that he hadn’t appointed Kolisi with any symbolism in mind, but again he has been pleasantly surprised to see the power of the influence his leader is having.

“To be honest with you, the initial appointment of Siya as captain, my plan never was this big thing to get the country behind us and have another plan with Siya,” said Erasmus.

“I’m quite honest with you now, and you’ll one day hear from the players how Siya was appointed captain.

“Siya was actually the best Super Rugby-performing team captain, and that’s the reason why he became captain of the Springboks. It was very sudden on him – I didn’t have a lot of conversations with him before that first Test match he became the captain.

“So, it wasn’t like four or five months where we sat down and worked out a strategy and a plan. 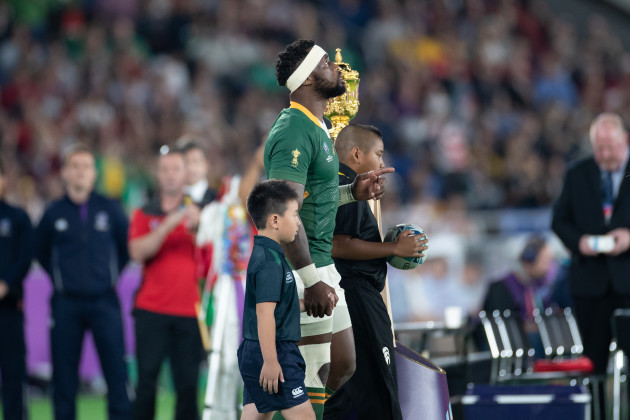 Siya Kolisi has proven to be an inspirational leader.Source: SIPA USA/PA Images

“It was a sudden thing, and I was caught a bit off – maybe a bit naive – in thinking that this would be such a massive thing for him. I was a bit naive, because the whole emotional things that went around that in South Africa, about having the first black captain for the Springboks, certainly caught Siya off guard, it caught me off guard.

“And I thought his game suffered a little bit in the first few games. Then he got better and better and we always knew he was a great player.

“When that got better, he got an injury, and when he got back from the injury, then he had to be captain again, and we had to get him slowly back into the mix for the World Cup.

“But the timing is great now. The last two games, he had great games again, and we also managed his game time really well. He is firing fit to have a good final.

“It’s his 50th Test match, and it is fitting and a wonderful occasion for a guy to be the captain, the first black captain – now it’s also sunk into me. I understand how big it is and I am not so naive anymore.

“It is a wonderful story, and for him to handle those emotional – not stress – but emotional extras, which come with something that I didn’t expect, is just wonderful, and really well done by him.”